Normandy, the land of the Gauls, the Vikings, William the Conqueror, the Bayeux
tapestry, the landing beaches…

Normandy in Northern France is the cradle of Impressionism: Monet, Boudin and Sisley to name but three impressionist painters… Also famed for its ancient cathedrals, monuments, churches and châteaux, Normandy is the land that gave birth to Flaubert and Maupassant. Whilst it has a tranquil landscape of half-timbered houses and grazing cattle, Normandy has been a battleground throughout history from the Viking raids to the D Day landings. Off shore Mont-Saint-Michel,space a 12th century Christian pilgrimage site, space rises from the sea like a mythical castle.

Accommodation for this trip is either in two Renaissance chateaux  or a renovated farm transformed into a music centre. Both château and music centre are owner managed. The owners of the farm and one of the châteaux live on site and personally look after the welfare of our groups whom they welcome into their “homes”. The majority of the rooms  in both places space are “en suite”. Both “centres” are approved by L’Education Nationale and Jeunesse et Sport for the accommodation of school groups. Top priority is given to the health and safety of the students.

Visits include Schools and museums, historically important towns and cities, fromageries, bakeries,  chocolateries and cidreries. Entertainments include a Soirée française, a Magic show and a Soirée normande.

We have organised a number of Language, Art, History, Cultural and Sport programmes in Normandy to suit the individual requirements of our partner schools and would be happy to discuss your specific needs 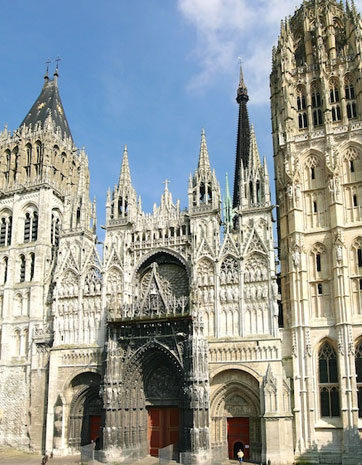 Children on a guided tour of Normandy’s capital city, Rouen